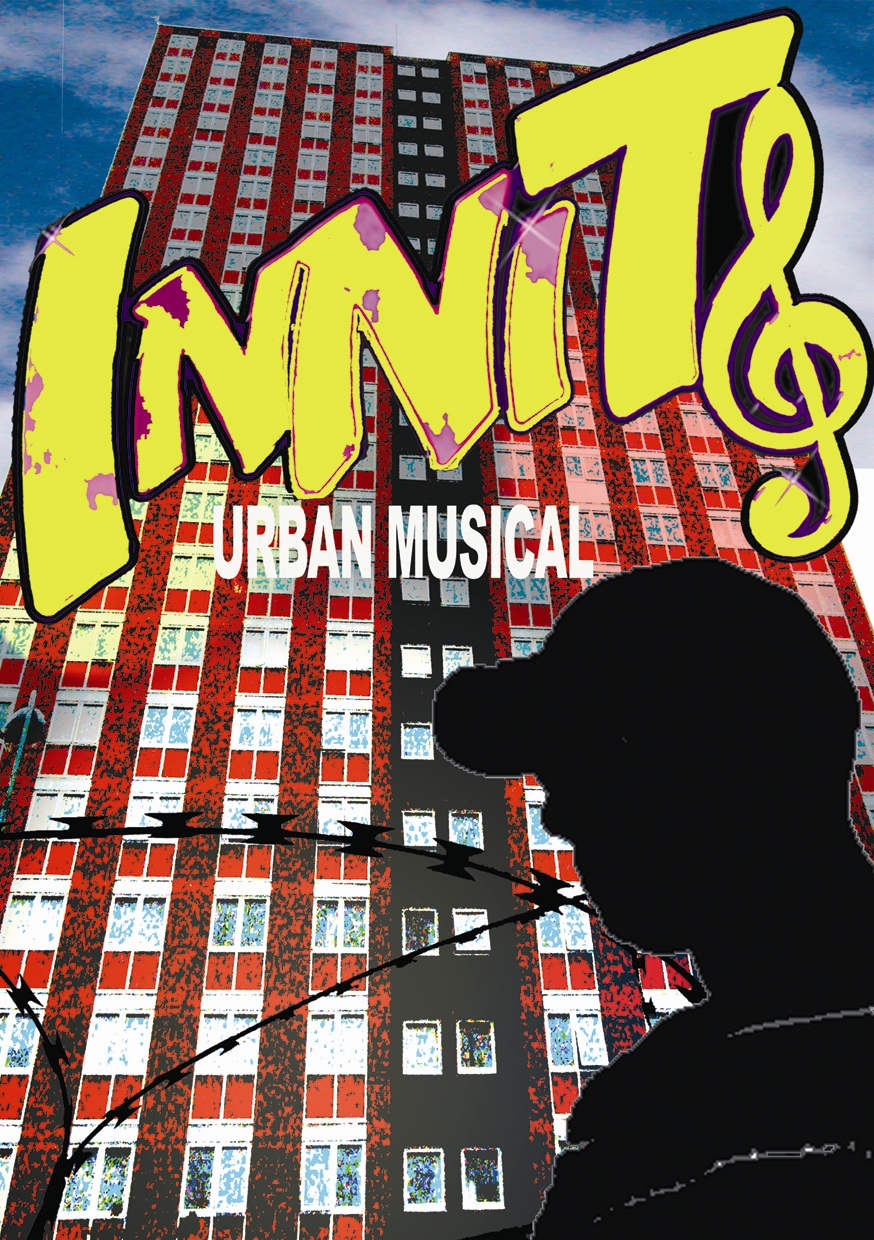 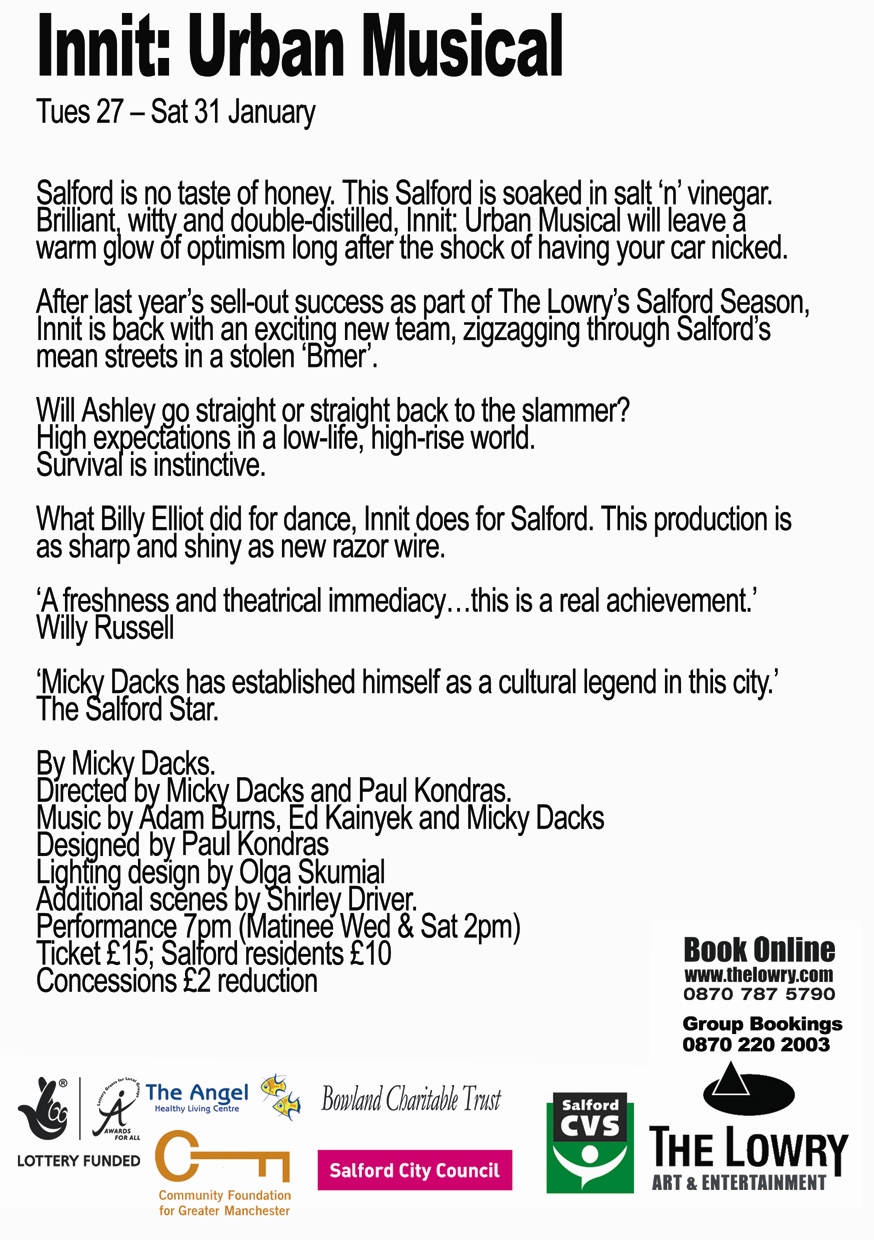 Building on the success of the studio production, we proudly presented our debut semi-professional production of ‘Innit’’, to an audience of 2000 disadvantaged young people from across Greater Manchester – funded by the National Lottery, Salford City Council, Community Foundation, Salford CVS, Bowland Charitable Trust and generous donations from community patronage.

We also engaged over 30 young people from disadvantaged backgrounds, to build on their skills, confidence and experience, by providing opportunities for them to fully participate in all aspects of creating a production.

Many young people involved in this project received professional representation and went on to have regular roles in Casualty, Emmerdale and Hollyoaks.

We also partnered with The Manchester College, which meant that 8 of the young people who were Not in Education, Employment or Training (NEET) were able to later enrol on technical courses.

One fifteen-year-old came to us through Manchester’s Youth Justice Service for a day’s work experience. He was due in court for a knife-related incident. However, he impressed the Company Stage Manager so much, that she asked if we could offer him a position on the crew! In association with his Alternative Education provider and Youth Justice Services, this young person was indeed offered the position of Assistant Stage Manager and he was trained in ‘running the show’ for the whole rehearsal period and all the performances, whilst also receiving an allowance for doing so.

The young man received a reference for his work to present to the court and was spared a custodial sentence as a result. He later went on to raise money for charity, as well as growing his hair so that he could donate it to hospitals in order that wigs could be made for cancer patients. 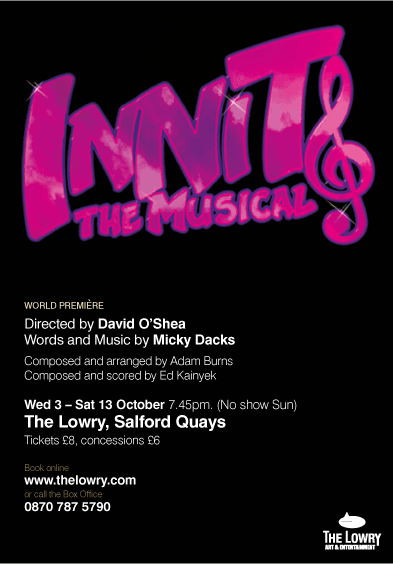 Following on from a successful ‘script-in-hand’ workshop to an invited audience of education professionals and Salford dignitaries, we were absolutely overjoyed to be commissioned by The Lowry’s community and education department, to produce a full version of ‘Innit’ in their studio space.

Our first ever theatre production began in the community, as part of the Lowry’s season of community plays.

Funded by Arts Council England and Salford City Council, we engaged a mix of community and professional actors, consisting of 6 adults and 12 young people, all of whom performed for ten nights.

All the young people received acting, singing and movement lessons, including fight direction. A further 6 had the opportunity to work alongside professional lighting, sound and set designers.

This production proved so popular, that extra dates had to be added!

“I’m from Salford and I like the story because the characters are like me, and it represents where I’m from. I’ve learned how to focus and be more disciplined, how to control my body and breathing and how to keep cool under pressure.” – Sam, 16

“I‘ve met loads of new people and the best part of the whole thing was that I’ve learned that I can do anything if I try.” – Jessica, 16 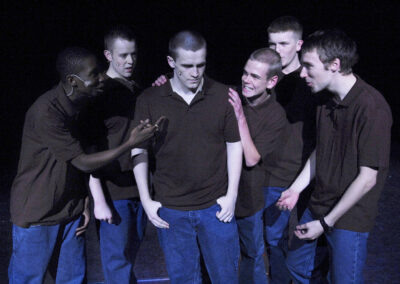 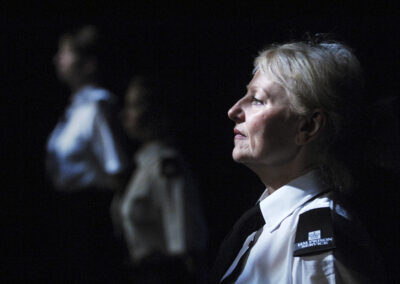 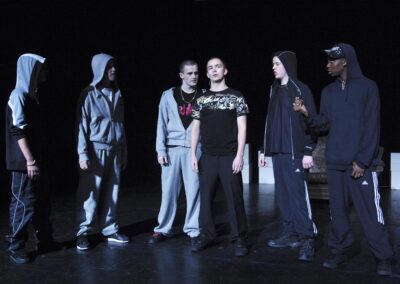 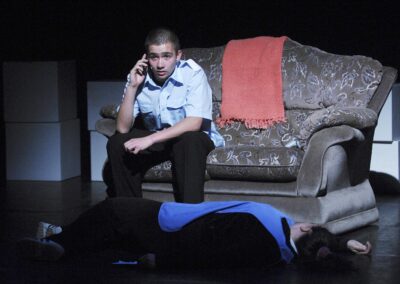 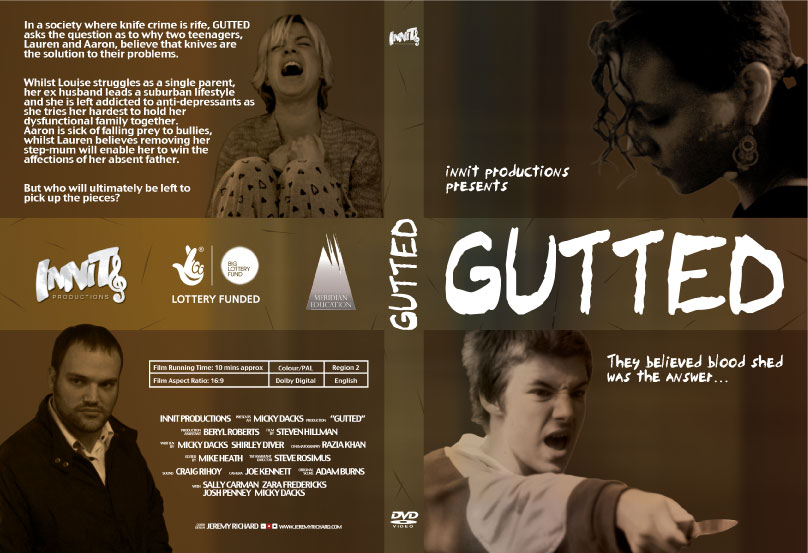 Following their visit to see ‘Innit’ at the Lowry, we were delighted to be commissioned by Meridian Education and the Big Lottery Fund, to produce this short film addressing the issues that associated family breakdown with knife-related crime.

OFSTED reported that, “the film-making experience did much to lift the self-esteem of those involved.”

Indeed, the lead participant, Zara (pictured), turned her back on gangs; and began working with young people herself.

The young man pictured with the knife was one of the 10 young people who came to see ‘Innit’ and attributes his re-engagement with education to that experience.  As a result, he subsequently took part in the film-making process.  Josh also turned his back on crime completely and began his training as a social worker with Manchester City Council in 2018.

In response to new measures laid out by the Ministry of Justice to the magistracy, regarding tougher sentencing for drug-related offending, Greater Manchester Probation Trust commissioned us to work with a group of 8 prolific offenders that had been subjected to Drug Rehabilitation Orders and that they’d brought to see ‘Innit’.

The Trust wished for magistrates – most of whom would come from a place of privilege – to have sight of a ‘tool’ that could give them a real insight into the dark, self-destructing and cyclical lives of those they would be sentencing, in the hope that they would consider Drug Rehabilitation Requirements (DRR) as an alternative to prison.

By delivering a series of intensive drama workshops that focused on emotional storytelling, our facilitators were able to build trust with the participants, extracting some real-life stories, including some of the reasons behind their drug use and entry into the criminal justice system.

‘Needles and Pins’ was the result of this intervention, with the film rolled out as an educational resource for magistrates, nationwide.

Two of the participants were profoundly affected by ‘Innit’ and the film-making process, subsequently turning their lives around.  One of the young men undertook an adult course in English and later enrolled in further education, as well as reconciling with his family – his not being part of his children’s lives having been one of his triggers. 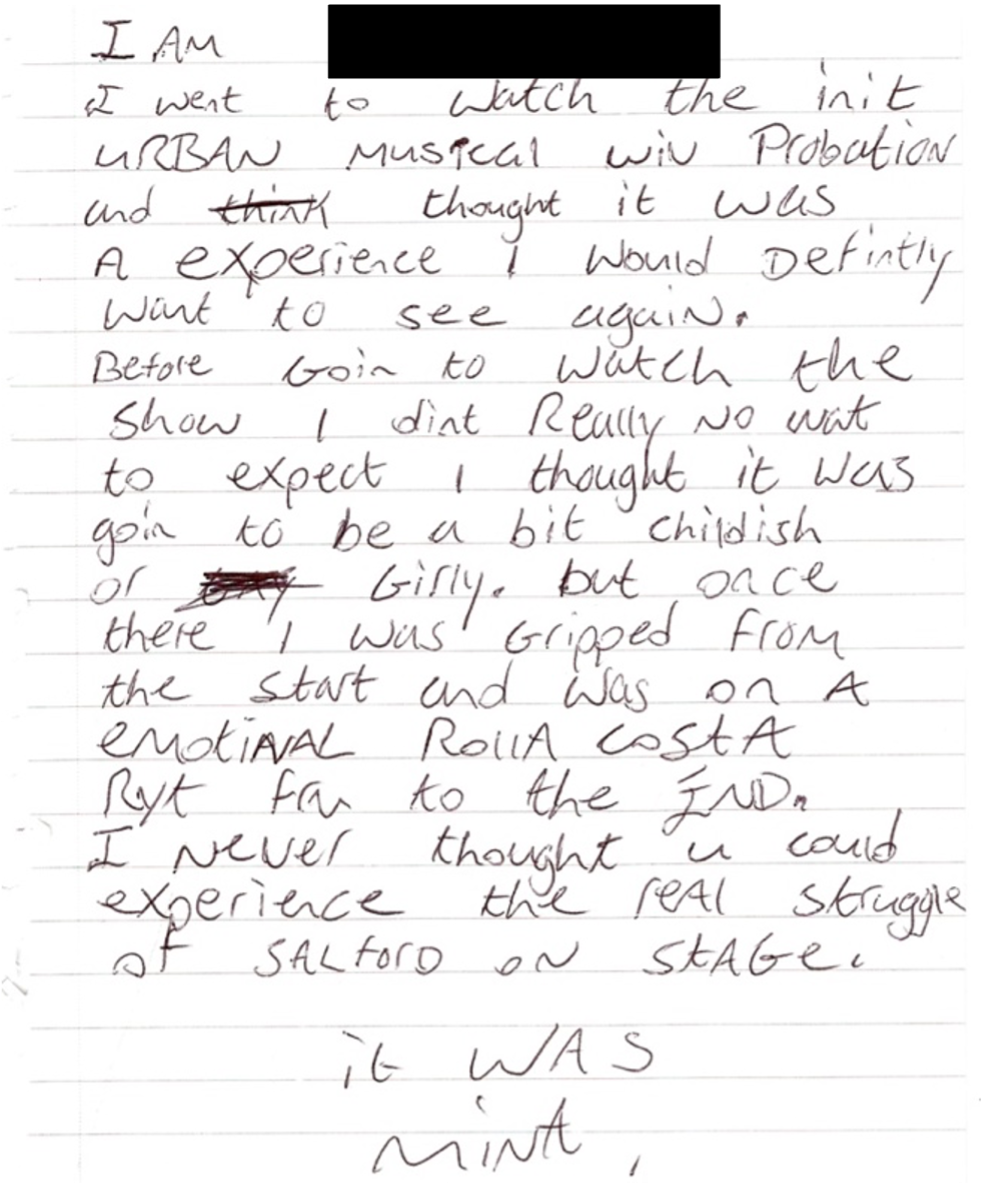 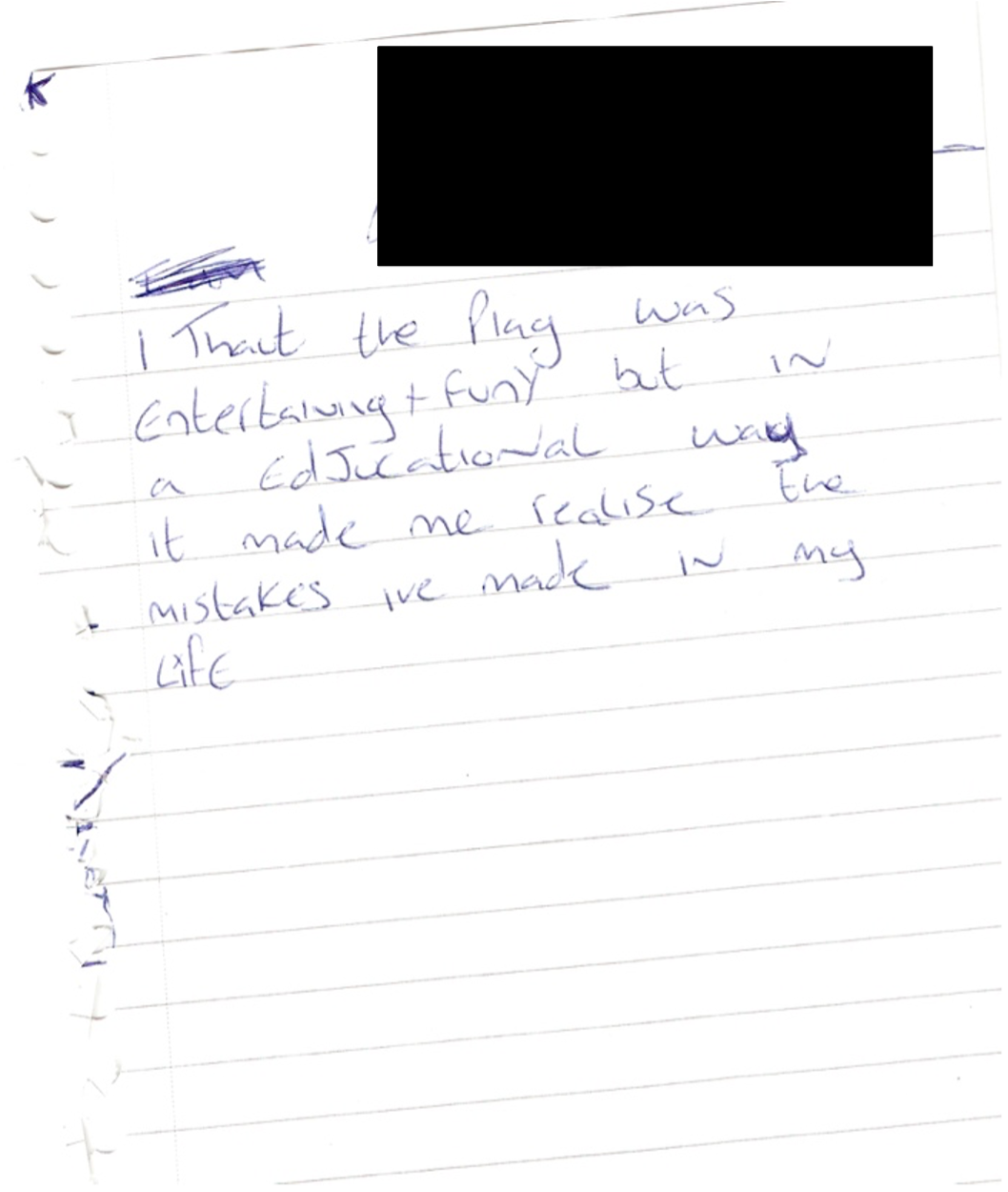 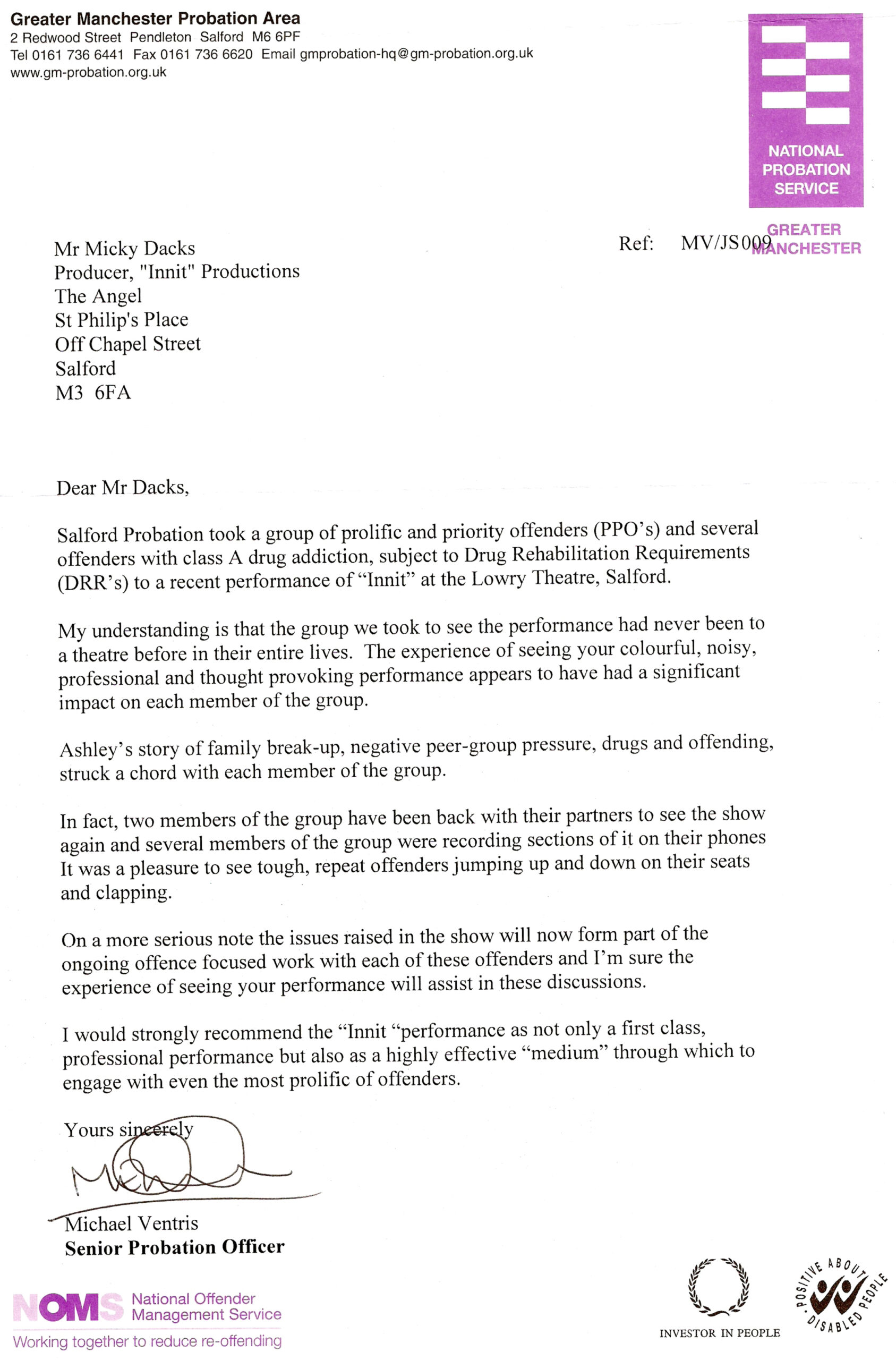 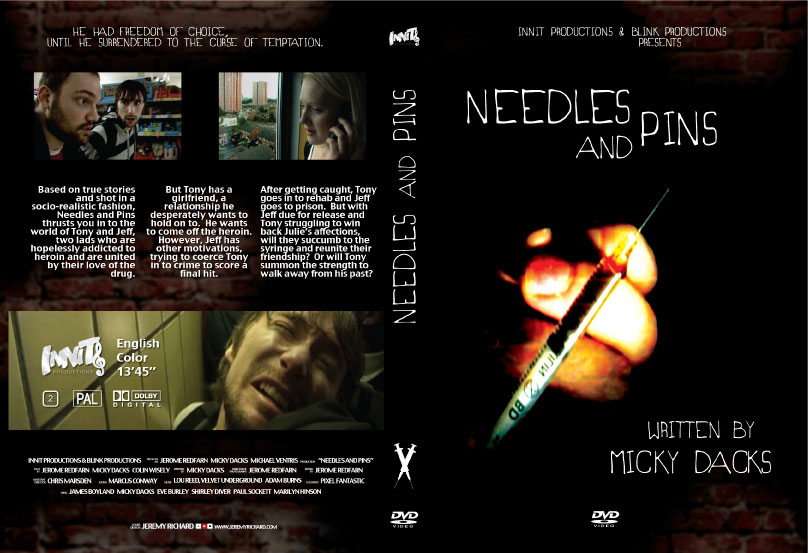